Come see me at my new location!!!

Sorry about the mess but we are remodeling our blog.
Stay tuned for the new look and content.

Go ahead and laugh but I have been saying that I have an unusually small head for a full grown adult and no one took me seriously. But I now have PROOF!

I would have had proof sooner, but the photo my friend Cindy's mom took of the two of us has not surfaced on Facebook. Cindy thinks her head looks big in the photo. Not so. It only seems big because mine is so small. Maybe now she'll put the photo up so I can use it on a scrapbook layout. Hint, hint.

The proof is my attempt to get new eyeglasses. I went to 3 different places to find glasses and none of them fit. All too big. It was incredibly frustrating. The glasses I have now aren't any better. I have to constantly run them under hot water to bend the earpieces in so they stay on my head.

Well, on the third attempt, the kind technician showed me to the 'teen' section. Hey, these are the glasses they sell to 12 year old's! And they FIT. Dozens and dozens of choices. It was amazing! I had so much fun trying on glasses that fit my face and looked fun and cool! When my new ones arrive, I'll post a photo to show you the eye bling.

So all the naysayers can eat crow now. I DO have a small head. I think I have some spare brain cells stored in my thighs. They are certainly bigger than they need to be so that's what I am going with.

In other news, my workouts are going great. I am able to run 30 minutes without stopping if I don't go too fast. I can run 3.6 miles but I have to walk a minute or two from time to time. I can do ONE real push-up. Hey, I can do lots of 'girl' push-ups but I could not move from a standard push-up position when I began. So I am feeling pretty good about my vow to 'Move Every Day'.

There is some stress in our lives right now, but that isn't stopping me from my one little word of THRIVE. I am hanging with things and taking care of business without losing my cool.

PLUS, I made my own deodorant from the Jungleman Naturals recipe and it turned out great! The RGH laughs at me because I get so excited about my do-it-yourself endeavors. But hey, I make a lot fewer trips to Target now.

In a few days, I am having another birthday. I'll post how many years on Thursday. 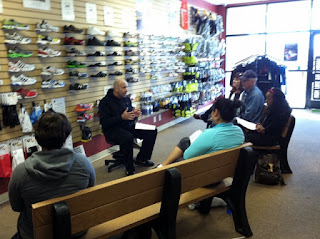 The THRIVE theme is going along well, so far. In our Happiness Project Book Club, my resolutions for January were to:

As of right now, I have done great with the first three. With the Running 101 class, I am continuing to get some great exercise sessions into my schedule. I have been pretty diligent with the protein with my meals. I haven't really felt a lot of stress the last month but I used the deep breathing in traffic a few times.
That 10 minutes of quiet time is just no happening. But I am keeping it real here. I am just not doing it. I must not really want it that much.

The month of February, I am focusing on my relationship with my husband. He isn't home until Wednesday so there isn't much to tell yet. We have a pretty good relationship already but I think I need to be more aware of how I say things to him. It may sound fine to me but he may interpret things differently than I mean them. So my main goal for February is to:

Be Mindful Of My Words

As for the rest of my world, I have a lot going on. We have another grandson on the way and I am spending a lot of time in California helping my daughter get things ready. She's on bed rest and when her husband is working away from home, I come to help with the boys, do errands, laundry, cooking and cleaning. I enjoy helping and being with the boys. When I get home from a week of this, I am whipped. This is not a bad thing. Just a reality.

I have some great green product finds to share in the near future. I promised myself I would take it slow this year. I tend to over-commit myself and then get stressed about it. The funny thing about that is that I am committing to myself! No one but me is keeping track and yet, I stress about it. Stupid really. Do other people do this or am I a pariah?